We have many questions but no one to answer them. The search for a meaningful existence is universal. We fight with the present for a better tomorrow. We fight with the demons of our everyday life to bring peace and happiness to life. We are always in a pursuit of making a better life for ourselves and our family.

The Monk of Lantau is not a book, it’s a journey. A journey to find and meet yourself. A journey we are seldom afraid to embark on, but life has its own way to teach and make you learn the important lessons of life on the right time when you in dire need or when you are ready. Mann Matharu tries to answer some of the questions in his book.

A tale from an unlikely source, a tale of a man with mystical healing power. Matthew finds himself on a journey through Europe, the Middle East and Asia in search of a healer who could restore balance and harmony in his life and heal his daughter. He met few incredible people and encounter incidents which took him into the depths of his own being.

An inspirational and insightful journey. I hope you all find your answers at the end of the book.

Mann is widely recognised for his entrepreneurial flair, his contributions to society, culture and philanthropy run much deeper and stem from a personal philosophy to live a compassionate and grateful life.

In his desire to help others, he has attained the privilege status of a Reiki Master Teacher. Mann himself went through a lengthy period of darkness in his personal life until he stumbled upon a path of self-realisation, culminated in inner peace.

The Monk of Lantau is Mann’s gift to those who are still searching for this peace. It is an inspirational fiction work that honors the journey our lives take through self-discovery to attain an existence steeped in balance, compassion, forgiveness and enlightenment. 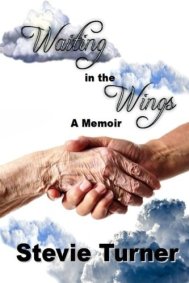 ‘Waiting in the Wings’ is a memoir of Stevie Turner with her mom, Dot, who has completed 92 summers of her life and health deteriorates more towards the final chapters of her life. Stevie takes the role of a carer and the mother-daughter duo spends much of their time together remembering the old bitter-sweet moments which also brings some revelation and confessions.

Suddenly at the age of 92, Dot starts telling her that she loves her which she never mentioned in her entire course of life. They argued bitterly and cannot see eye-to-eye and this sudden revelation getting to know them each other better.

I think every mother is like Dot. Over protective and caring and never see her child has grown up already and thinks they are still small and innocent and cannot take care of themselves. They try to protect them from the evils of the world. And I think every child is like Stevie who wants to be free and live by her own ways. We know we can take care of ourselves and responsible enough to manage the stuff of our life but it is hard and sometimes impossible to explain and make the parents understand. We are still little for them, a baby of few days or months who piss in his pants and puke on the shoulder while tapping on back after a meal.

The book tells the story of every mother-child relationship. I love reading the book and liked the way it unfolds and written. It is a well-constructed and intelligently and honestly written book.

Stevie Turner retired early from her post as a medical secretary to concentrate on writing suspense, women’s fiction, and humorous novels. She won a New Apple Book Award in 2014 and a Readers’ Favorite Gold Award in 2015 for her book ‘A House Without Windows’. Her psychological thriller ‘Repent at Leisure’ won third prize in the 2016 Drunken Druid Book Award contest.

Stevie lives in the East of England and is married with two sons and four grandchildren. Most of her novels are now available as audiobooks, and one screenplay, ‘For the Sake of a Child’, won a silver award in the Spring 2017 Depth of Field International Film Festival. Some of her books are currently being translated into German, Spanish, Italian, and Portuguese.

Stevie can be contacted at the following email address: stevie@stevie-turner-author.co.uk

You can also reach to her at Twitter@StevieTurner6

‘The Healing Paths of Fife’ is a memoir of Diana Jackson. A travel path full of fantasy encounters. She met significant strangers while walking the coastal paths of Fife and had equally special and strange experiences and adventures. Some are spooky and some are pleasant. Every new day of Diana’s life is full of exciting adventures and with every day she understands what the time demands her to do. The Path proved to be a healing and self-discovering.

Diana Jackson was happily redundant from her lifelong teaching job. She has to relocate with her husband whose job is transferred to Fife from Bedfordshire. She met some interesting and strange people while walking and discovering her new place and settling down in her new life. She made new friends which she met by fate and these people help in discovering her path in Fife and in her life. She was fortunate to discover a sense of peace.

After relocation, she had plenty of time in her hand and need to think which path she wants to travel next. Her experience of self-discovery and finding her calling might help you with some of the challenges you face in your life and finding peace like Diana.

The book is divided into two parts. The first part tells the story of her relocation and settling down in her new life and traveling the healing and rejuvenating paths of Fife. The second path tells the beginning of the new life of Diana after she and her husband threw herself in the community life of Fife.

The story is a memoir with elements of fantasy. The book is a travel diary and a true account of Diana’s life after relocating and settling down in her new life with her husband in Fife.

Visit the beautiful and mesmerizing coastal paths of Fife with Diana.

Diana Jackson from Bedfordshire relocated to Fife, Scotland with her husband. Her aim for 2016 has been to settle into their new life. In 2017, she is back writing again with her new book ‘The healing Paths of Fife – A Fantasy memoir. Other works of Diana – The Riduna Series, historical fiction set in the Victorian era through to the early 20th century. ‘Murder, Now and Then,’ was inspired by an unsolved murder back in 1919 in the heart of Mid Bedfordshire. Diana has also compiled a memoir of a Norman Campbell ‘The Life and Demise of Norman Campbell’.

You can reach her to diana@dianamaryjackson.co.uk

Lacey London is a bestselling author of Clara Andrew Series. Her newest release is ‘Anxiety Girl’ is about a girl Sadie Valentine who is like any other girl and suffers from anxiety, depression, and panic. The life when do not turn out the way we want or turn into a wrong direction, we experience an anxiety. It is not a problem, a certain limit of anxiety is very normal in daily life and one cannot ignore it but when anxiety over power your mind and takes a toll on your life then it needs to be taken care of and that is what Sadie experiences in her life.

Sadie Valentine is an artist. She paints. She sells her paintings and that is her only income. A series of events lands her into a state of anxiety and one day she experiences a panic attack. Over months her life takes every wrong turn and she bottled them is like digging her own grave. With her best friend Aldo by her side on every step will she able to fight the three devils ‘panic, depression, and anxiety’?

The story deals with serious issues which often swept under the carpet or ignored. The one who suffers felt ashamed to voice his/her illness. The issue is handled carefully and comprehendingly. The story voices many who are going through the same period. The story also accounts friendship of Aldo and Sadie.  A painstaking story of Sadie Valentine by Lacey London.

‘Because it’s there’ – George Leigh Mallory

‘SUMMIT’ is a fictional story that has fact in the foundations of its two imaginary journeys. The obvious fact is that Mount Everest is the highest mountain in the world standing tall and high at the height of 29,029 feet or 8,848 meters.

This book is originally published by Blackstone Publishing (UK) and published in India by Westland Books. This is Westland’s Books first international release and after reading, I have no doubt why the publisher chooses this book.

The two stories run parallel in the book; one is of 1938 of Joseph Becker who is a Nazi soldier in German military and other is of 2009 of Neil Quinn, a seasoned mountain guide in charge of the 16 year old son of a Long Island Billionaire.

The story of the book is refreshing. A masterpiece which you cannot afford to miss. For all the avid readers who want to read something good, this is the book for you. I recommend this book to all the readers not just those who are fascinated by the mountains (like me) or adventure or thriller reader but the reader who always ready to take a dive in the ocean of words. Don’t miss it, I am saying it again. This book is madness.

As a reader it is my one of the priceless possessions. The book like this is written in once in every thousand book. Don’t just go with the name of the book, it is not about the tracking, the difficulties they face to reach on the top of the world or something. This is something you have never read before. The book is a complex thriller which does not let you move out of your place. A compelling page turner.

‘I received a copy from the publisher (Westland Books) in exchange for an honest and unbiased review.’