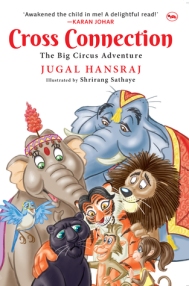 I want to read more. I did not like the story ends. Everyone has a child inside and this book is for that child. I love the colorful illustrations that made my reading more pleasurable and interesting. Cross Connection is a story for every child of every age group.

Bhole Ram the Brave is a big grey elephant. He is the most reliable and every animal in the circus bank upon him. He is brave, intelligent and smart. He is ready to walk miles on the name of friendship. Chunky the Funky monkey is notorious and prankster. He likes, no, loves to play pranks and most on Chintamani, the Lion. The majestic looking king of beasts is actually a timid and scared cat by heart. Other characters are Jenny, Savitri, Pintu Da, Uncle Geri and Kaalia. All the animals live happily and perform in ‘The Great Indian Circus’.

In a freak accident on a dark night, the bodies of Bhole Ram and Chunky’s get switched and they are forced to live each other’s lives. And it is not easy as it sounds.

Every character has its own characteristic qualities and adds fun and laughter to the story. It won’t be surprising if you get lost in the story and finds Chunky and Pintu Da jumping in front of your eyes and you too want to join Chunky in his mischief.

A complete package for your day and your kids. I am sure your kids will love it and a child in you also deserves a delightful read that brings back the finest memories of early childhood reads. Turn the pages of Cross Connection, swing on the trapeze, balance on the beach ball and let the child lose.

Jugal Hansraj is a feature film actor, writer and a National Award-winning film director based in Mumbai. He began working in films as a child actor, Masoom (1983) and went on to become a lead actor in films like Papa Kahte Hai (1996) and Mohabbatein (2000). In 2006, he turned writer-director and made the animated film Roadside Romeo and in 2010 he directed the feature film Pyaar Impossible! He is currently the Head of Creative Development for new projects at Dharma Productions. Cross Connections is his first book.

Shrirang Sathaye has been an animation lover, designer and director for thirty years. He currently works as an animation consultant. His other interests include political/satirical cartoons and illustrations. 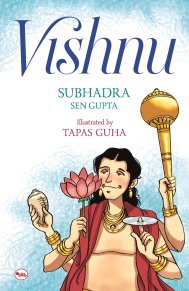 Our childhood is filled with such stories of Devas, tales of their magical powers and how they used to defeat Asuras time and again. Each story is equally enchanting and full of magical and mesmerizing brave encounters. The rivalry between Asuras and Devas is never ending. Gods and Goddesses live in heaven, Swarga, below was the earth and under that was the netherworld of Patala. Here lived the Asuras who were the enemy of the devas and they were always fighting with each other.

Vishnu is a children’s book comprising three stories about Lord Vishnu, the Lord of preservation. This book has three delightful stories of Lord Vishnu, the god of gods. The most clever and witty, kind and generous and always come up with a plan to save the Devas from the Asura. Every story is beautifully told by Subhadra Sen Gupta and accompanied by magnificent illustration by Tapas Guha

This is a must read book for every child and must be in every child’s bookshelf. Parents should bring this book for their children and introduce to the world of literature and mythology. If your child hasn’t read anything before then this could be a great start for him. For all the mature readers, this is an excellent book to revisit your childhood and relive the most missed phase of your life. I cherished reading this book and beautiful illustrations are like icing on the cake.

Gift this book to your kid or one who loves reading.

Subhadra Sen Gupta has written over thirty books for children. Right now she is waiting for a time machine so that she can travel to the past and join Emperor Akbar for lunch. She loves to travel, flirt with cats and chat with autorickshaw drivers. If you want to discuss anything under the sun with her, email her at subhadrasg@gmail.com

Tapas Guha has been working for more than twenty years as an illustrator. He loves to draw comics and illustrates children’s book. Ruskin Bond is one of his favorite authors and he loves Tintin Comics.