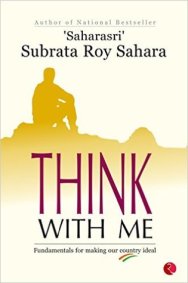 ‘Think With Me’ is written with the thought to incite the citizens of India to think of their country, rise above from individual benefits, rise from ‘I’ and ‘My’ and think for the development of the country. The author wants to insight the challenges the country is currently facing.

Author, as a countryman, finds his emotional and moral responsibility to bring attention to these problems which he thinks is the five fundamental issues needs to be resolved for the development of the country and betterment of its citizens. The five fundamental problems are related to politics, leadership, population growth, education, the media, and religion. The author wants his every sincere and respectable countryman to ponder over where, after all, ‘did we go wrong?’

Yes, in past decade India has shown a tremendous pace in growth and among one of the fastest developing nations. But, these issues need an immediate attention. There are laws made in regard but mere making laws do not solve the problems; they need strict implementation and amelioration of them and above all, the participation from the countrymen.

He is worried looking at the growing corruption in the politics and irresponsible behaviors of the politicians, the degraded standard of education which only imparts a degree and not making a better human, the speed of populations’ growth which only flights every year despite the laws and efforts not yielding any results, the role of media in society and religion which is considered an important arm of the society.

He discussed the issues at length in his book and wants everyone and not just readers and those who are occupying the higher posts of leadership and decision-making to think with him and act before it is getting too late. He suggests some solutions which could be implemented for the benefit and prosperity of the nation. He is not writing this book to agree with him, he wants to bring in light the issues and compels to think deep and justifiably. It is an honest effort by the author to fulfill his duty as a citizen of the country and made a collective effort with the people of his beloved country.

Author’s Bio – Subrata Roy Sahara popularly known as ‘Saharasri’, is one of the most successful and talked about figures of corporate India. He laid the foundation of Sahara India Pariwar in 1978. ‘Think With Me’ is his second book in the ‘Thoughts from Tihar’ trilogy. The first book ‘Life Mantras’, was a National Bestseller after its launch in February 2016.

‘I received a copy from Writersmelon in exchange for an honest and unbiased review.’

15 thoughts on “Think With Me”